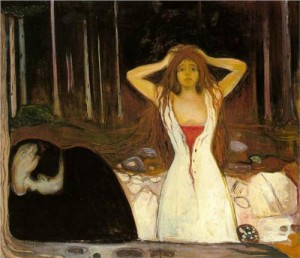 There are daily challenges, and they are unavoidable. Everyday we struggle with fear and anxiety. When it evolves into dread, it is called angst. The word easily rolls off the tongue, and we all emphasize the ‘t’ at the end. It feels good to say it, doesn’t it? It is, in a way, triumphant sounding. However, what do you really know about angst? The dictionary defines it as “a feeling of dread, anxiety, or anguish.” Angst is normally associated with the intense frustration of teenagers and young people as conveyed through music, but angst is something we deal with on a day-to-day basis no matter our ages. We will never escape it. We should therefore embrace it. It is, ultimately, a healthy feeling. The trick is to understand it. After all, angst can make or break you.

The philosophical definition is, as you would imagine, a bit different from Merriam-Webster. The term was a favorite of Danish philosopher Soren Kierkegaard.  In his eyes, angst is a profound and deep-seated spiritual condition of insecurity and fear in the free human being. What does this mean? Well, freedom is a heavy, heavy burden. It is a struggle that weighs us down. Freedom is a horrible thing to waste, and deep down this stresses us out. Freedom is a responsibility. If we do not follow our dreams or live life to the fullest, we are failing in our duty to freedom. Angst is the fear of this failure. While Kierkegaard’s angst is fear of responsibility to God, angst is also the fear of responsibility to us, to our dreams and to others. Kierkegaard sums it up best: “There is nothing with which every man is so afraid as getting to know how enormously much he is capable of doing and becoming.” We are deathly afraid of bettering ourselves, personally and socially.

The politics of relationships

Angst is normally associated with teenagers, but it is also associated with the intense frustration of political and social activists. English singer songwriter Billy Bragg is a good example. Emerging from the streets of Thatcher’s England, Bragg’s angst jumpstarted the ideals of a new generation. Songs like “A New England” channeled the raw energy of an angry youth. He sings, “I don’t want to change the world / I’m not looking for a new England / I’m just looking for another girl.” While the lyrics here may not scream social change, Bragg argues for personal change as a harbinger for social change. We have the freedom to change things, to get another girl and to create a new England, but we don’t. The song encapsulates angst. In politics, we should always be bettering ourselves. The same holds true for relationships. Every relationship is like Washington DC or London – backstage dealings, handouts and blackmails. Bragg suggests a connection between a new England and a new girl. In the song, Bragg fears failing in his duty to both a new England and a new girl. We must not fear! Below is a video of the song, courtesy of Mrsomeone100001.

Known for his political and social activism, Bragg’s latest album is a meditation on relationships and marriage. The songs on “Tooth and Nail” focus on his 20-year marriage. Bragg says, “In any relationship there are ups and downs … and making a commitment is tough. It is far harder to stay in the boat. It’s by examining your own failings and articulating them that you touch people.” Like his earlier albums, “Tooth and Nail” is a demonstration in angst. This time, however, it is the fear of failing the one you love. Many relationships fail because each person struggles with an all-powerful angst. There is a freedom in holding someone’s heart in your hand. It is a great responsibility, and many crumble beneath the pressure, throwing the heart onto the floor and walking away.

What to do? By recognizing that there will always be angst, we are better suited to deal with it. We must understand that each relationship is an exercise in the burden of freedom. We must not be afraid to fail. If we are afraid, we will have no chance to better us and the relationship. Angst is a difficult pill to swallow, but it is a pill that we HAVE to swallow. There are three things you must do when dealing with angst: persist (do not throw in the towel), ask (and live) questions and be proud of yourself. Existence is a beautiful thing. It is even more beautiful when you have a partner. We are not looking for a new world, just looking for better people.

If you are struggling with angst, either personally or with your partner, my counseling services are available both over the phone and in person in Lapeer and Charlevoix MI.  Call 231-881-7335 for a free phone consultation.  We can also Skype, if you prefer.  Angst is a fact of life and essential in the growth of any relationship.

« The ants are in great pain, and so are we
Spring clean your daily routine »

"Spring is like a perhaps hand" "The Fury Of Rainstorms" 2012 depression statistics angst and relationships Anne Sexton Billy Bragg's "Tooth and Nail" Boston bombings Business Coaching Carol Lorraine of Napa Charlevoix MI counseling services cleaning spring Clinical depression 2014 coping with depression David Wax Museum Do I Need a Life Coach Federico Fellini and dreams healthline how to achieve balance in life how to communicate effectively how to cope with grief how to deal with angst how to deal with grief how to manage stress how to resolve conflict Lapeer MI counseling services Life Coaching Benefits maintaining relationships Marriage counseling services in Michigan Oklahoma tornado Patton Oswalt Boston Personal life coaching in Michigan Psalm 34:18 Ralph Waldo Emerson's "Boston" Reasons to Hire a Life Coach Soren Kierkegaard spring cleaning checklist spring clean your daily routine The Billy Graham Rapid Response Team The Lord is close to the brokenhearted what are dreams? what is a life coach? what is angst? what is spring cleaning? what is the American Dream? what to look for in a life coach